Jack Howlett was the Director of the Atlas Computer Laboratory for the whole of its life. A Celebration of His Life and Work was held at the Rutherford Laboratory on the 24th September 1999. The following article originally appeared on the MirandaNet Web Site and refers to an email exchange I had with a member.

And: did Watson of IBM really say that the world would only need five computers?

Some time ago your editor received an email from John Impagliazzo of Hofstra University, in which among other items he mentioned his History of Computing web site. Your editor looked, and got a slight shock, as there is a family link with a machine on display on that web site. So I had a pleasant time reminiscing, and as nostalgia isn't what it used to be, here is an edited version of the reply I sent to John, which might be of interest to others.

Your seemingly casual reference to your web site has opened up all sorts of thoughts and memories for me. As you know, you have a random image on your front page, and on the occasion that I happened to click I got the picture of Vannevar Bush and his differential analyser/analyzer. I have a remote connection with the UK development of this machine, which was a remarkable example of the early mechanical computers.

Apparently the first UK differential analyser was built out of Meccano in 1934 by Douglas Hartree. I am grateful to Meccano expert Wes Dalefield who has found these references in facsimile pages of the Meccano Magazine:

In addition, here is a further picture of the Hartree machine, and here is a modern reconstruction in Meccano. 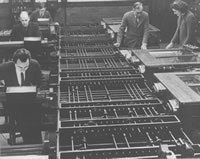 This machine is on show at the Science Museum, London, next to half (yes, only half, and it takes up an enormous amount of space) of the full-scale version that Hartree had built. The other half is in the Museum of Science and Industry in Manchester.

There's also an old black and white picture of the machine in action, with one operator in smart shirt and tie and dapper suit, quite recognisable to those who knew him, my father, Jack Howlett.

I got quite a shock when I first saw this picture on public display in the Science Museum, as I had no idea of its existence. When I tackled my father, he replied in his usual modest way that yes, the Science Museum had asked him to talk about this machine, and it seems he was then probably the only person still alive in the UK at least who had any idea how the thing worked, as he had worked it extensively during the war (solving various rocketry problems and then some seminal work in the Tube Alloys project, which was the UK contribution to the Manhattan Project, as I later found out after his death). He then told me about Hartree building the Meccano version to see if it could be done, and of course it was pretty good and did the job at a fraction of the price of the full-size version. (Well, the model was more of a concept machine to see if it could be done. I have since read that the accuracy of the Meccano version was only about 2%.)

Apparently Hartree decided to build his analyser after hearing of Bush's contraption, but a nice symmetry is that the idea first came from Cambridge - one of Thomson's (Lord Kelvin's) inventions - where Hartree was working until he went to Manchester where one of his PhD students helped him in this task. When the war broke out, Hartree gathered a team of crack mathematicians, including my father who at the time was working as a railway mathematician, to work for him on a variety of projects, most of which were so hush hush I had no idea my father was involved in them until after his death. My father did his PhD with Hartree, and remained friends with him until Hartree's death. As a child I remember going to the Hartrees' house in Cambridge, where he had a 'pianola', and I loved to pretend that I could play a Chopin polonaise whilst pedalling furiously to keep this musical mechanical contraption going. I remember him as a really kind and nice man, always in a crumpled suit, and it was only much later that I realised that I had been playing in the house of one of the greatest theoretical physicists in the land. My parents remained in contact with his wife, my mother frequently visiting Elaine until her death, and I am the proud owner of a mahogany book shelf that once belonged to the Hartrees. A rather tenuous connection to one of the greats of the first half of the 20th century, I know, and one which very few people will appreciate, hence my care over telling you.

Whilst looking for snippets, I came across a reference to Hartree in a mention of the famous Watson (head of IBM) quote about the world only needing about 5 computers. It seems that there is no record of Watson ever saying this, but there is this quote on Hartree:

“I went to see Professor Douglas Hartree, who had built the first differential analyzers in England and had more experience in using these very specialized computers than anyone else. He told me that, in his opinion, all the calculations that would ever be needed in this country could be done on the three digital computers which were then being built -- one in Cambridge, one in Teddington, and one in Manchester. No one else, he said, would ever need machines of their own, or would be able to afford to buy them.” 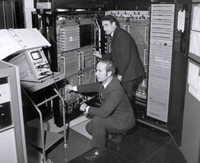 Well, back to my connection: my father was one of the post-war champions and pioneers of computers, running various computers for the government at Harwell (Mercury and Pegasus are names that I vaguely remember) and who eventually persuaded the UK government to pay for the Atlas Computer Lab at Culham, near Harwell, in what used to be Berkshire but is now in Oxfordshire. It was at the time the largest and most powerful in Europe if not the world, and he actually got the government to agree that University departments in the UK could use if for free for one day a week. This was true pioneering.

I was often taken to view this machine, and it was enormous. [I've you've ever looked at the CPU in your home PC, bear in mind that it works faster and performs a greater variety of actions than the CPU you can see in this picture, complete with two of the several full-time staff it needed to keep it running! The picture below shows you how to change one of the many disc drive units - think of it more as a floppy!]

“Atlas lab had been set up, under the direction of Jack Howlett, a former student of Douglas Hartree, to run a powerful UK designed and manufactured machine, Atlas, for the benefit of UK science. To understand what was involved it has to be remembered, no doubt to the astonishment of some younger members of the audience, that there was a time when computers were hideously expensive, quite enormous engines. (As an aside, Atlas as installed in 1964, spread over two full floors of air-conditioned space, one floor devoted to holding the CPU and the other to holding the peripherals, largely Ampex one-inch tape drives and an enormous drum-store. It took 14 truck-loads to get the machine to the lab and it took three months to set-up and test. It cost £2.5M at 1964 prices (so probably about £50M at today's prices) and it developed .25 MIPS.”

There's a brief biography of my father here:

And details of the celebration of his life that the Atlas lab had after his death in 1999: 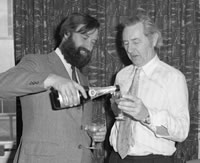 You might like to add Hartree to your hall of fame. From a UK perspective he ranks quite high, I think. I know there is no chance that you would add Jack Howlett to your hall of fame - trouble is, he was so modest that few people are aware of his role in promoting computers in the UK, so he wouldn't register. But, as you can tell, I'm immensely proud of him, and still somewhat in awe of him. He also taught me a lot about enjoying life, music, walking, and good wine!

Just back from a visit to the Museum of Science and Industry in Manchester where I met Charles Lindsey who was involved in (responsisble for?) the restoration of the Manchester section of the Differential Analyser and who has some videos of this (section of the) machine in action - it gives an idea of the noise it makes, and you can almost smell the oil and rubber as the cogs whirr and the results are drawn. This is real mechanical computing, folks, and deserves to be preserved! The museum is thinking of mothballing this machine ... that would be a crime.