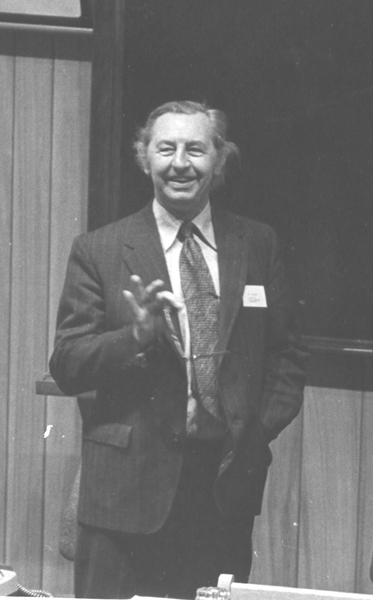 Jack Howlett was the Director of the Atlas Computer Laboratory for the whole of its life. A Celebration of His Life and Work was held at the Rutherford Laboratory on the 24th September 1999.

The profile below appeared in Quest in July 1971.

Dr. Jack Howlett, founder Director of the Atlas Computer Laboratory, an excellent host with a wide circle of friends, a fluent linguist, a lover of good food, wine and the arts, can be seen in his modern office at Chilton with very little ceremony.

The friendly quiet atmosphere of the Laboratory is due in large measure to his influence and the importance that he attaches to the social and cultural aspects of life whether at work or at home. The large number of pictures placed in different parts of the Laboratory are his choice and reflect his interest in modern painting; you may disagree with the choice made for a site for some of them, but it is impossible not to be stimulated by the presence of these works of art.

So much a part of the Harwell scene for many years, it is difficult to appreciate that there are people who have not met or heard of him in the wider realms of the Science Research Council. Stretching back into the past when computing machinery meant a Brunswiga adding machine, his career completely covers the computer and computing revolution of the past 30 years.

He was educated at Stand Grammar School, Manchester and read Mathematics at Manchester University. For his thesis 'Numerical Integration of Partial Differential Equations' he was awarded a PhD In 1944. His early career with the LMS railway from 1935-40 was interrupted by the war and it was during the wartime activity in research establishments that his expertise in numerical analysis began in association with some of the foremost analysts of the day, including the great pioneer Professor Douglas Hartree. He worked on the first differential analysers that were strictly mechanical and after 1946 used one of the first electronic computers, the Mark 1* at Manchester.

In 1948 he became head of the Computing Section in Theoretical Physics Division, AERE Harwell, working on many of the early reactor projects. During the next ten years computing machinery became of increasing importance to the Authority in its reactor work and he actively encouraged the use of computers in many of the Divisions of AERE. In 1960 the need for large scale computations led to the Atlas Project and the subsequent development of the Atlas Computer Laboratory under the control of NIRNS, initially, and now SRC. Dr. Howlett was appointed Director in 1963 and the Laboratory successfully introduced the use of the Atlas I computer in October 1964 by AERE, RHEL and the Universities. The growth of association with University research work across practically all disciplines has led to an increasing involvement in the national computing scene. In 1966 he was elected Fellow of St. Cross College, Oxford and was awarded the CBE in the New Years Honours List of 1969. He is a member of the Institution of Electrical Engineers, a Fellow of the Royal Statistical Society and a Fellow of the Institute of Mathematics and its Applications.

He has lived for the past ten years at the Old Farm House, Tubney with his family. His five children show the wide variety of his own interests in their choice of careers, a mathematician, a linguist, a chemist, an hotelier and the youngest still to decide from his own wide set of interests. With his wife, Joan, he was for many years an enthusiastic Scottish dancer and they have been associated with many of the Abingdon theatrical and musical ventures. A keen interest in music ranging from Bach to Bartok and beyond has been shared with his children who are in addition performers on a number of instruments. He enjoys being reminded of the days when it was possible to cycle from Abingdon on the A34 and to appear, amongst other equally gay theoretical physicists, in the Division at AERE in a red shirt, shorts and sandals! Those of us who over the years have been privileged to meet some of his many friends over lunch or during their visits to the Laboratory know that this circle is truly international; not many people on a return flight from Hong Kong could claim to stay the weekend with friends when the plane made a scheduled stop at Teheran!

If you should join the Atlas Laboratory, an invitation to take coffee with the Director would follow for, being with the staff in the Laboratory is very much an important part of his life.